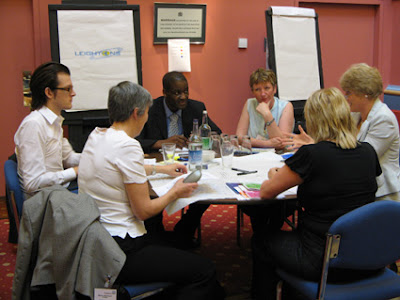 I held a workshop for Project Managers last to consult with them about a possible knowledge sharing process. It was a great success, with a fantastic buzz, and some interesting outcomes.

There were many requests for a "facebook" type social networking facility, the emphasis being on speaking to people directly, rather than accessing materials which related their activities second hand.

There was also a desire for face to face networking opportunites, and telephone conferencing appeared to be popular, due to concerns that something was lacking in text based online communications.

The emphasis was very much on "at time of need" communications, and everyone agreed that building a network of potentially useful contacts was a good idea.

Many were requesting access to a repository of guidance and information, but by far the greatest emphasis was on the need to communicate directly. Very much along the lines of what George Siemens and Stephen Downes have been saying about Connectivism, that knowledge exists in the network itself, rather than in a knowledge repository, and those that attended the workshop echoed this ascertion.

It was a fantastic experience, to talk to so many people with so many opinions, and it really did confirm that we're on the right lines with Web 2.0, as long as we remember it's about people making use of technology, and not the reverse. As Jay Cross says in a recent post on the Internet Time community.

People, not technology, keep us from making our relationships at work more productive and fulfilling. 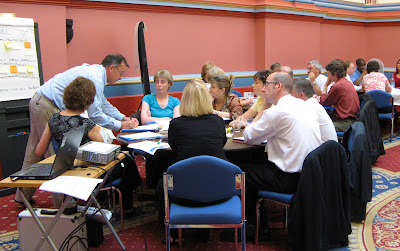 Helen I couldn't agree more with your post. A lot of KM/Know How Projects fail because a solution has been rolled out, usually a piece of technology which people are expected to use straight off without understanding how they are going to use it or how it is relevant to the work they do.

Face to face communication is as you suggest key and sites like Facebook and Blogs if used correctly are going some way to address people concerns around Knowledge Sharing.