In January this year the Prime Minister David Cameron announced he would be making £140Million available to transform the UK’s “Sink Estates”.

The media interpreted his speech describing why he thought this was important in ways which really demonstrated their own political leanings.  The Guardian described the proposal as an attempt to “blitz poverty”, the Independent focused on the “brutalist” nature and high rise architecture of many of the worst estates, whereas the Daily Mail went for a focus on the aim to reduce gang culture.

Housing is a key issue for Government, and the recent election saw something of a manifesto war with each party pledging to address housing if elected.  Right to buy, affordable housing and starter homes were all high on the agenda.  And it is a high priority for the Department of Communities and Local Government (DCLG), with housing being mentioned in 2 of its 4 key responsibilities.  But this is by no means the first attempt to improve the UKs estates, or address the high levels of poverty of those who live in them.  Even Cameron himself alluded to the “nature of state failure over decades” in attempts to improve our housing estates.  Park Hill in Sheffield is a classic example of well-meaning and initially successful attempt to reduce hardship, poverty and cramped living conditions and instead producing a “hooligans’ playground”.

Most recently there have been relative successes, born out of the Blair era New Deal for Communities approach to housing, which had both a physical and social focus. But grand plans take time and money.  Tony Blair made his first significant speech on the Aylesbury estate.  That estate is only now being re-developed.

There have been plenty of negative reactions to Cameron’s plan.  Jeremy Corbyn has called his new approach ill thought out and tantamount to “social cleansing”.  Others believe (as do I) that poverty is truly complex issue which cannot be “blitzed” by bulldozing housing estates.  And some estates residents are less than keen to embrace the announcement.

Residents on the plans to regenerate estates - 1:38

So does building nice new houses really help address the issues being associated with “sink estates”? Almost certainly not, but ways of approaching regeneration which may provide better results are being promoted by experts in the field and mirror effective approaches to improving services seen in Manchester, Essex and other places who have or are seeking devolution deals.


So my three steps to estates regeneration heaven (probably) are:

It seems obvious, but designing something which people use with the people who will use it works.  Product development rarely happens without some user input to test ideas and feedback on improvements.  This clearly works with service design, were including service users, staff, local businesses, community sector and public sector in the design process work much better than those where a few council staff assume they know best.

As Nicholas Boys Smith of Create Streets says “Estates could be co-designed, with residents, neighbours, future residents, architects, developers, local planners and others working out a scheme together over several days. This is very different from the standard approach where architects design a scheme and then ask often inconsequential questions (“what colour do you want the doors?”) about it afterwards.”

Currently the government has not been able to answer where current tenants and right-to-buy owners will live when their homes are destroyed. Those who bought affordable homes using the right to buy scheme should be guaranteed a home on the estate when work is completed.  This has been a problem for previous regeneration efforts like the Woodberry Down and the Heygate Estate in London and Park Hill in Sheffield where too few social housing properties were made available due to a focus on selling properties to fund the schemes, or when rental terms were changed.

£140 million has been earmarked for this work.  That’s across 100 estates.  And the money allocated is in loan, not grant form.  So it has to be paid back.  As Hank Dittmar mentions in his piece in BD Online, “By way of comparison, the US Hope VI effort, begun during the Clinton administration to replace failed social housing estates with walkable, mid-rise and mixed-use schemes, has expended more than $6 billion in the years that it has existed, tackling just over 200 projects. Current funding for what is now called Choice Neighbourhoods is reduced due to budget constraints, but ranges between $90 million and £120 million, devoted to planning grants and two to three projects per year. Clearly the £140 million should be an annual amount rather than a total.”  A long term commitment with funding is going to make success a lot more likely.

Working on this estates regeneration project will be my first role in DCLG.  DCLG are now asking for people who want to get involved to get in touch.  As I’ve said above, designing estates together may well be vital for the success of any regeneration effort.  The more people who care that get involved, the more likely this attempt to make life better for people living on the most deprived estates in the UK will be successful.
If you are an estate tenant, housing associations, a resident in areas around estates, an academic with an interest in housing, a planner, developer or just someone who cares, then you can help.

So my last post was 6 years ago!  Wow, time flies.

I'm picking up where I left off really, blogging along to a learning programme (previously Masters in Learning and Development, this time Diploma in Digital Leadership) as part of the learning experience but also to share some insights and interesting stuff about digital leadership and other the other things that I've become interested in in the last 6 years like:

I'm still pretty keen on narrative, story, conversation, sensemaking etc etc so I'm sure these will get a mention too. 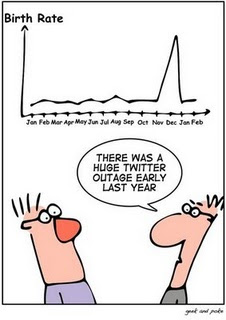 Based on this video posted by the Archduke of Twitter, Stephen Fry, you’d think Twitter was a load of mindless guff posted by idiots who think we care about what they had for dinner.

But its so much more than that. It’s a huge library of knowledge, insight and information, whose value to others is constantly increased by the action of re-tweeting. Disagree? Think re-tweeting is just lazy? It actually creates value for your followers.

Sensemaking and personal knowledge management
I came across this post by Harold Jarche on Twitter which started me thinking... It applies a sensemaking approach to Twitter for personal knowledge management, or for any humans reading, keeping a handle on what you know and making sense of it.
Mostly it’s a post about how to manage interesting things you’ve found on Twitter – favorite them, review them, add to more context to them, and publish them in all their expanded glory . Jarche calls them Friday Finds

An example:
Tweet: @roundtrip – 10 ways the “world of work” will change in the next 10 years @Gartner_inc “non-routine” work = adaptive innovative

What I found interesting was the sensemaking model Jarche refers to, because they way he manages tweets, via his Friday Finds, adds value to the original tweet. 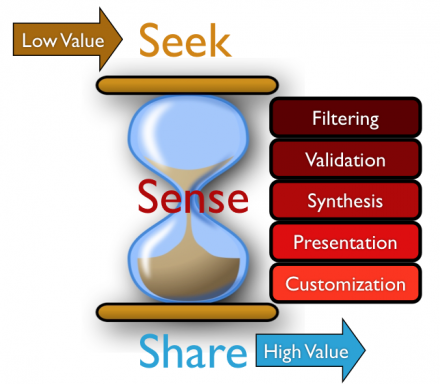 I’d argue that synthesis is probably higher in the value creation list of this model than presentation, but that’s just an aside.
What Jarche is doing, he is doing primarily for himself, but its adding value to the basic information contained in a tweet. This is librarianship if I ever saw it but it did make me think about the concept of re-tweeting.

Consider the tweet – you read it, find it interesting, you retweet it. Referring to the model above, some sensemaking has taken place. By retweeting, by virtue of passing on a tweet you’ve filtered out something useful from amongst the millions posted and personally validated it. Congratulations - you’ve just added value to the tweet for your followers.

Nothing is new under heaven
I intended to say something clever and thought provoking about Twitter retweets, but in researching this post I find that like all my good ideas, it’s been done already. Its been done here and here and here . Obviously there’s a counter argument, based more on the number of available characters than on the concept of ownership of information, but in the interests of balance, see it here .

According to Twiterlyzer, my influence type is Spider, A Spider has “a mid-sized network” and is socially connected. Clearly I am not a Source, one who communicates original ideas (I love labels as get-out clauses ;-) So I can feel no shame in repeating what someone else has said. I’m just adding value...
Posted by Helen Nicol at 11:34 1 comment:

I feel the need to confess. It's been some considerable time since my last blog post, my Hail Mary's come in the form of these animated videos from the RSA. These are my favorite, there are more on YouTube should you be inspired to view them.

Drive: The surprising truth about what motivates us

Illustrates the hidden truths behind what really motivates us at home and in the workplace.
Smile or Die
Acclaimed journalist, author and political activist Barbara Ehrenreich explores the darker side of positive thinking.
Crises of Capitalism
Radical social theorist David Harvey asks if it is time to look beyond capitalism towards a new social order that would allow us to live within a system that really could be responsible, just and humane?
Posted by Helen Nicol at 15:01 1 comment:

"Cross that you little bastards and you die..."

Thanks to David Gurteen (again) for pointing out this particularly brilliant explanation of complexity theory by Dave Snowden, using the analogy of a party for a group of 11 year old boys...

These are fantastic videos satirising KM and tell you more about how it should be done than attending any number of KM conferences. Genuis (and I wish I'd thought of doing this).


Thanks to Green Chameleon for posting them.
Posted by Helen Nicol at 10:50 No comments: