Those of you coordinating an online community will know how depressing it can be to see that your most active members sometime just disappear. This, according to Wenger, McDermott and Synder in their book, Cultivating Communities of Practice, is normal.

Active members may move away for a time, depending on time, life changes, lack of interest in current topics, all manner of reasons. Conversely, those who only read but don't take part in discussions, may suddenly become very active, posting and commenting when once they were invisible to all but those with access to site usage data.

My own community has been changeable in terms of participation, with people moving from very active to inactive and vica versa. The diagram below shows this movement across 2 months. The colour labels are to show the anonymised logons. 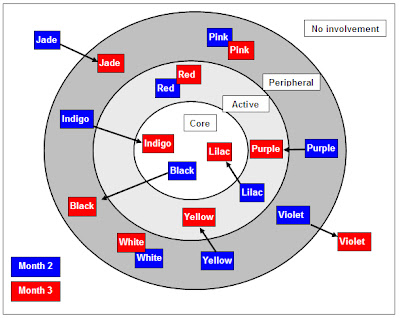 So it's comforting to know that people do naturally participate to a greater or lesser extent, however there is one important element that must be considered if this is to without the collapse of the community - that there is something to motivate people to move to a more active role.

Jakob Nielson's much referenced article on participant inequality indicates that this is a far higher level of participation than most sites experience. He suggests that the following is the case, and the following is more the case.

Those who read but don't contribute are important, as I have said before, but without the active and core members, there's nothing to read! This really is a problem if your community is tending towards the 90-9-1 percent rule, rather than the 75-15-10 rule that Wenger predicts.

although it's nice to know that your most prolific contributor leaving the group is not the end of the world, that others will change role and fill their shoes, without something to engage with, people won't move from their peripheral role to a more active level of participation.

The important thing then is to make sure your community is motivated by giving them a purpose.

Hi, I really like your description of how members of a community change role over time, superb.
BTW I think you are refering to Jakob Nielsen with the 90,9,1 quote :-)

Thanks Henriette, and cheers for pointing out my mistake - have now corrected the quote to say Jakob Nielson...